Home  ›  Blog  ›  Fathom: A Collaborative Exhibition Between a Hungarian and a British Studen...

Fathom: A Collaborative Exhibition Between a Hungarian and a British Student From Bath Spa University

It’s hard to picture a better setting for Fathom than the Walcot Chapel. In the five days it ran (July 21-26), the collaborative exhibition by Hungarian Zsolt Dudas and Louise Norris attracted more than 300 visitors. 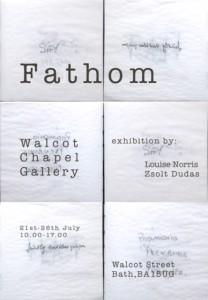 The gravestones give me an eerie welcome as I turn down Walcot street, hoping to get to the chapel in time to escape the brewing storm clouds. The headstones serve as a kind of prologue to the exhibition, reminding what will happen to all of us one day. 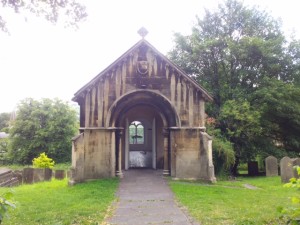 Fathom what will happen to you too one day,Norris’ text-based installations seem to be continuing the theme. Dudas turns on a projector and words appear on the white flaking walls. 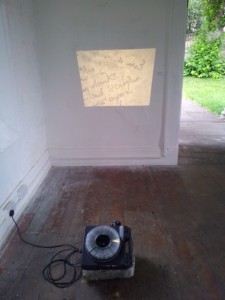 As I learn from him, Norris is quite secretive as to where she gets the words from, translating them into the language of art, where they become something else, since rules of syntax and grammar no longer apply. The projector ‘click-clacks’ every time the slide changes, reminding me of a guillotine – the image probably inspired by the setting. 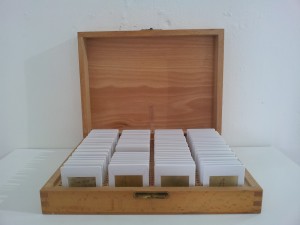 Dudas tells me  that he is completing his MA in Fine Art part-time, working as a healthcare assistant during the day. The job seems to have had a strong impact on his work. For instance, it has made him reflect how a body, whether having been executed in horrid circumstances, or dying comparatively peacefully in a hospital bed, has the same form in its last moments. 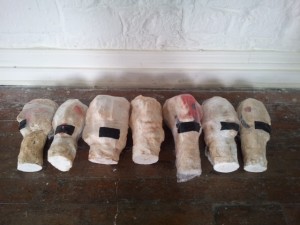 I ask Dudas whether suffering, which seems to be embedded in the fluent yet misshapen and faceless bodies which he paints, is a continuous theme in his work. He thinks for a moment, then draws my attention to Economicus, a statue of a body which has been ripped to pieces by its own desires; then towards Ungestalt Study II, III, each displaying half a man, half-crucified, an anonymous martyr.

‘One type of suffering,’ Dudas says, ‘is when you are suffering from the way that you live and end up like homo economicus.’  The economic man is disembodied, as if suffocating even after death. ‘Then there is suffering for someone else when you end up executed.’ Ungestalt is much more pleasant to look at, as if this type of suffering was worth more. Perhaps this is because the imagery has touched some inner moral compass which I respect in others, but ultimately, like most people, leave for someone else to follow.

Behind Economicus, Norris’ large text-based screenprint Sum rises like a propaganda poster, belonging to some totalitarian state. It seems to announce the things which led Economicus to his doom, because he, instructed by the society we live in, valued them too much: ‘Flat, Work, Money.’ 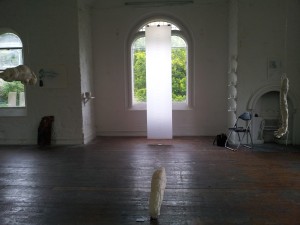 As we ponder the doom of humanity, the sky begins to clear up and more visitors arrive at the chapel. An elderly man with a cap seems to hit the nail on its head when he gives his impression of the exhibition: ‘It’s very modern, init; very spiritual, almost ghostly.’