Last February the Mayor of Kaposvár and the visiting Civic Party came up to see the bells of the Abbey and to watch them being rung for the Sunday Service of Choral Matins, which they then attended.

The following report of a special piece of ringing in memory of one of the founders of Bath’s fortunes, Beau Nash, the arbiter of good manners for the Bath Season, will perhaps bring back memories of those mighty bells and of those who sound them out over the city week by week to proclaim that the Abbey is there to serve all its citizens and their visitors. 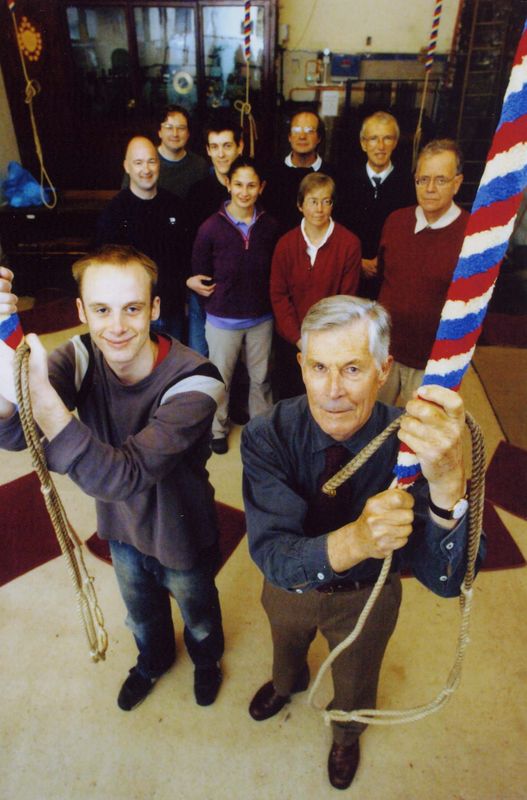 Jim Cook treasurer of BKTA ringing one of the bells

This year is the 250th anniversary of the death of Richard “Beau” Nash. He died on the night of 12/13 February 1761, and was buried in the Abbey on the 17th. After the funeral (on the grandest scale imaginable) the Bath ringers “to shew their Gratitude and Respect to their worthy Benefactor, rung (sic) a Funeral Peal of Grandsire Triples, consisting of 1260 Changes; the Clappers of the Bells being muffled on one Side”. (This is an exceptionally early reference to half-muffled ringing, and possibly the first ever recorded quarter-peal.)

In honour of the anniversary, a repeat performance was obviously called for, and eight ringers representing the city and the University duly assembled on Monday 14th February 2011 and succeeded in repeating this piece of 18th century homage to a great citizen – on the same bells, hung in the same oak frame, and similarly muffled by leather pieces fixed to one side of the clappers to give a quieter, mournful “echo” effect on every second change. The performance took 54 minutes.

As far as we know, this was the only event commemorating the anniversary.