Home  ›  Blog  ›  Hungarian Puzzles and other International Approaches to Mathematics

Hungarian Puzzles and other International Approaches to Mathematics

On the evening of October 9th Geoff Smith, senior lecturer at Bath University, gave an informative talk about the origins of the international mathematics competitions which exist today for students coming towards the end of their secondary education.

Originating in the 1950’s in countries including Romania and Hungary the first group of competitors involved came from countries which was the old eastern bloc. Nowadays there are nearly one hundred different countries competing, with China one of the strongest competitors.

Geoff is team leader of the British team and has successfully been involved in trying to improve their performance over the last six years. He touched on the reasons why he thought some countries performed better than others, and different approaches in other countries. In Australia for example the introduction of a pre competition warm up between British and Australian students created a big media interest in Australia and a demand that mathematics was given a higher profile, so that Australians be given every opportunity to beat the British. 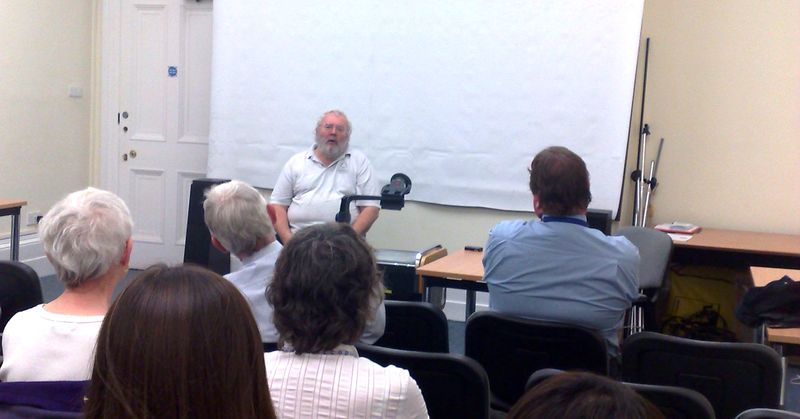 In his talk Geoff also encouraged discussion amongst the audience of nearly 40 people, of a variety of ages, on the possibilities of perhaps a state funded boarding school for exceptionally gifted mathematicians. Similar arrangements occurring in other countries.
Members of the audience included students who were taking A level mathematics. Geoff, who is also in charge of admissions for mathematics at Bath, was also able to give an insight into the demands for places at University to study Mathematics, and what the trends were likely to be over the next few years.

With a number of references to Hungary and some amusing anecdotes it made for an interesting evening for those who were involved in mathematical education, and also those who just came for the experience. Once again thank you Geoff for giving up your time to lead this talk.