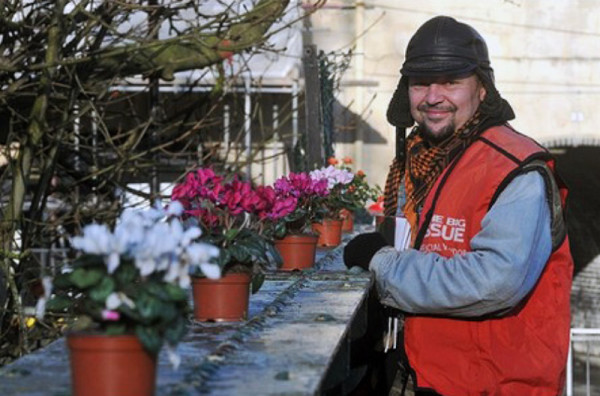 To hundreds of commuters, it’s just a bridge, a way over the river to get to and from their offices.

But to Big Issue seller Istvan Kakas, it’s actually his place of work.

Already the 46-year-old Hungarian has become well-known for regularly sweeping the area where he sells the magazine at the back of Bath Spa railway station.

Now he has decorated Halfpenny Bridge with an array of cyclamens and red roses.

“I would buy one a day from the florist in the SouthGate,” he said.

Since then he has had to move them closer to him because vandals had pushed them into the river.

Mr Kakas stands on his spot on the bridge from 6am, until he’s sold all his Big Issues.

The former chef who worked under Gordon Ramsay and Michelin-starred chef Michael Caines, once applied for to be a dustman in Bath, but was told he was over-qualified.

He said he liked to keep his pitch spick and span.

“The Bridge is a nice place to work, especially when it’s sunny like today, but sometimes when the bridge is empty I get bored and cold, so I sweep. It makes the time pass and it keeps me happy and stops me from being cold.”

Mr Kakas has become something of a tourist attraction, with punters stopping to photograph him with his broom and blooms.

“Some people even take pictures of me and my flowers,” he said.

“And I smile at them because I’m happy, just like I want the people to be.”

Mr Kakas added: “I would say I know 80 per cent of the people passing over my bridge, so I like to keep it clean for them, to make them happy for their day.”

One fan is Penelope Cromley-Billon, who lives in Bath and takes the Halfpenny Bridge route on her way to work in the mornings.

She said: “Istvan Kakas is just a breath of fresh air, an absolutely fabulous man that deserves some recognition for his amazing outlook on life and his kindness.”

“I was walking across the bridge last week and he shouted out to me ‘ya’, it’s his interpretation of my South Africa accent. It made me smile for the rest of the day.”