In October 2010 we went to one of Bath’s twin cities; Kaposvár in Hungary. It was an eye opening experience that has broadened our perspective of Eastern European Culture. Hungary is a completely different European country to the commercialised countries more popular for tourists.

Arriving in Budapest we were struck instantly by the grandeur of the country. The Matthias Cathedral stood proudly along the Fisherman’s Bastion where we spent the morning on our first day. A history teacher form the school in Kaposvár we had come to visit, Ivan, and their head teacher came to take us around Budapest before bringing us to Kaposvár. Whilst inside the Cathedral it became clear that Hungarian architecture is unique and flamboyant. From the Fishermans bastion we were given a view across Budapest, looking over the Parliament buildings and the ‘Pest’ side of the City. We then crossed the “Széchenyi Lánchíd” (the chain bridge) over the river Danube to the Pest side and were amazed by the contrast between the two sides of the city; the ‘Pest’ side was far more industrialised than the green and historic ‘Buda’ side Thanks to having native tour guides we were able to visit was Ivan said was the best cake shop in town; and I wouldn’t disagree! That evening we made our way to our home for the next 3 days; Kaposvár. On our way there we were greeted with a breathtaking site; the sun setting over the largest lake in Europe – Lake Balaton. We stayed a while to admire this picturesque scene unfolding before us as the sun disappeared behind Hungary’s wine district. 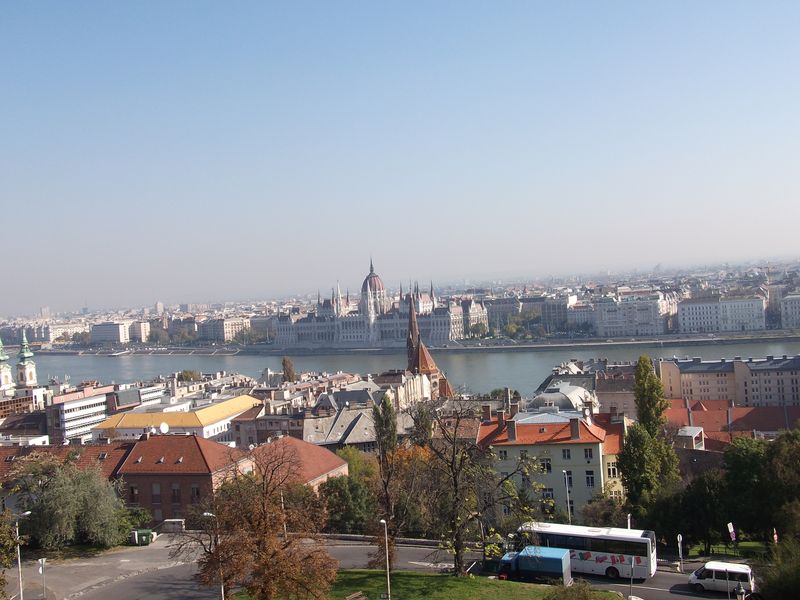 On arriving in Kaposvár that night we were given a fleeting glimpse of the school with which we had been in touch for many months previous to the trip. After a brief look at their giant foyer we headed to our accommodation; a genuine log cabin hidden within the cities horse riding academy. We, along with our teachers (and for the duration of this trip our adopted parents!) Gavyn Upham and Nancy Connelly were amazed by the lengths at which our Hungarian friends had gone to give us a great cultural experience. That night we walked around the neighbourhood by our cabin, experiencing a true, untouched European city. 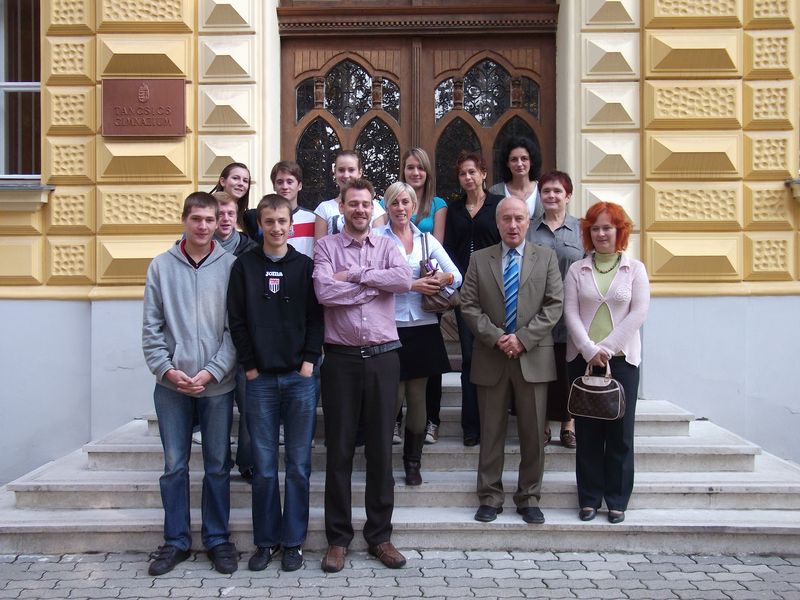 On day two we visited the school and some of students from there gave us a tour of the school while some teachers gave our teachers a tour. Their school was far larger than ours, with over 1000 students compared to our 350 and a foyer capable of housing a good three or four table tennis tables! They had a sports hall which could no doubt take our sports hall inside it twice. We took part in an English class that morning which really enforced the importance of English in the career prospects of Europeans. They could all speak relatively fluently and you quickly forgot that their first language wasn’t English. To see how advanced they were at the language and how many lessons they had of it a week showed that they viewed languages with far more importance than we in Britain. However in many ways our school had better facilities; our weights room and radio facilities are far more advanced than theirs. We had a school meal in their cafeteria and the food served was far different to what we have; while we have a largely multicultural menu (from Spaghetti to Burgers) they have a more Hungarian menu and, while we weren’t big fans of the food on offer, we enjoyed the experience. What was amazing was that they finish school when for us it would be lunchtime! They start partially earlier than we would do at our school but finish far earlier. However they do not go home after this; many of them play sports in the afternoon using their extensive facilities. 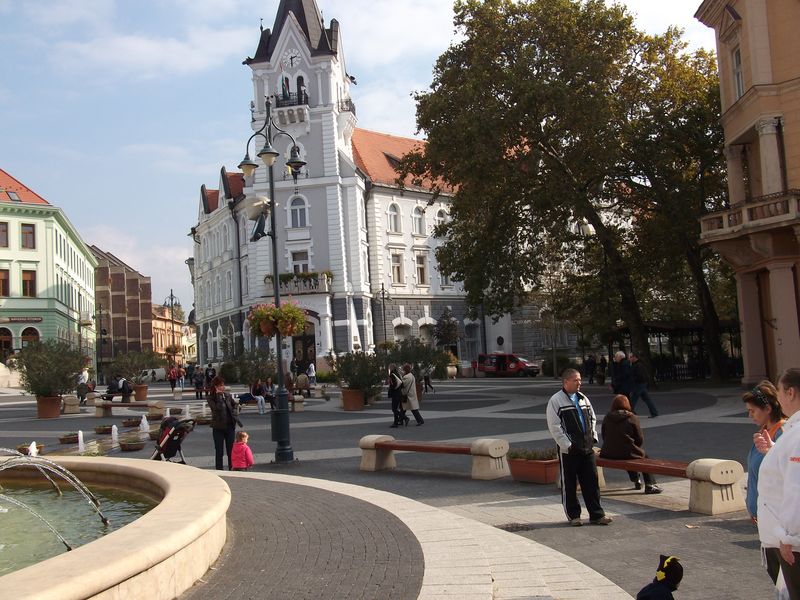 That afternoon we visited the towns media outlets; newspaper, radio and then television. It was interesting to see that this town (which is smaller than Bath) had all three of these outlets when Bath does not have a television station or Bath-based mainstream radio station. After a few hours walking around the town centre and experiencing the unique atmosphere we went out for the night with the students to a local restaurant for a meal before playing some pool at a nearby complex. Luckily for us the England – Montenegro football match was on the television, sadly for us it was a dull 0-0 draw! Spending time with the Hungarian teenagers was an interesting experience as it was the first time we had spent time abroad with natives of the country we were in.

Our final full day in Hungary was extremely fun; we visited the horse riding academy in whose premises we had been staying. After this we went to see some old village thatched housing in a nearby village (the word village being extremely amusing as the Hungarians hadn’t quite got the pronunciation right, making the ‘v’ more of a ‘w’ and village now village!). This was very interesting to see and once again we felt honoured that our Hungarian counterparts had laid on such a lovely range of activities for our trip. We went back into town and did a bit of souvenir shopping before heading off to one of my highlights of the trip; the spa. Much like in Bath, Spa’s are part of Hungarian culture with around 1500 in the country. Though we live in Bath, going to a spa for us it a big deal and something we don’t get to do often. However for them it didn’t seem to be such a big thing and it was if it was common practice! We had the whole spa area to ourselves; a Jacuzzi, pool and two saunas. The head teacher of the school we visited came along and spent what can only be described as a lengthy time in a sauna; for the amount of time he spent in it there was a good chance he would be the size of a jockey on leaving it! This was the last real activity on our trip and was the perfect way to finish our final day in the country with our new European friends. 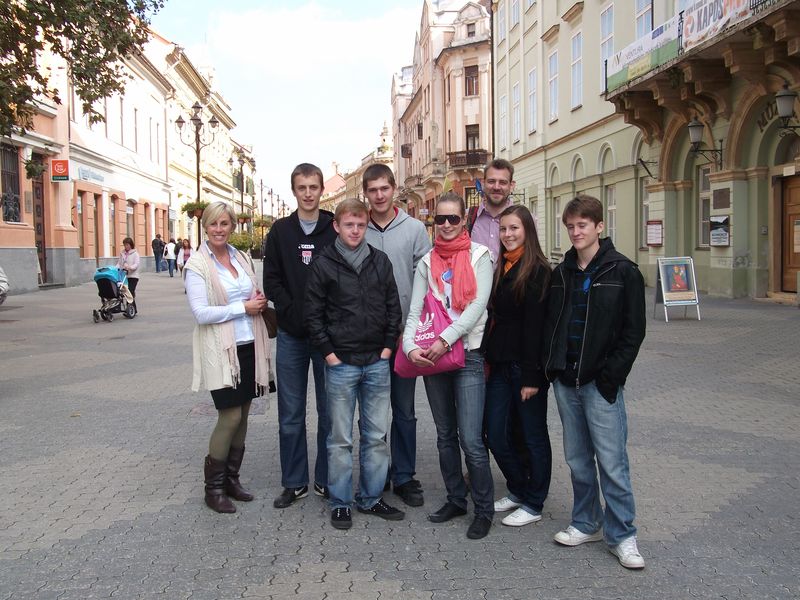 And so we came to the day of our leave. We made our goodbyes and headed off to visit the countries wine district before we went. Sadly, we missed our ferry crossing and so had to spend an extended period of time going around the largest lake in Europe to get there! But it was worth it; it was a clear day and the sun glimmering across the lake made for a picturesque finish to a picturesque journey. We sat down on a balcony together for one final Hungarian meal by the lake and reflected on the most intriguing trip we had ever taken.

Visiting Kaposvár, and Hungary in general, was a real treat; it was the first time the three of us had ever seen an European city which had not in any way been ‘Americanised’ or flooded with tourists. To be able to see an untouched part of Europe; to reach into what was hidden behind the once impenetrable ‘Iron Curtain’ and to fully experience the cultural riches of Europe was simply unforgettable.